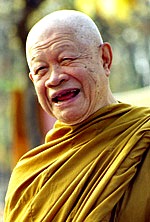 Master Teacher of meditation, Phra Dhammongkolyarn, Luangphor Viriyang Sirintharo, has attained many extraordinary accomplishments and has overcome numerous challenges.  The summary below highlights some of his most important events in his life.

Luangphor Viriyang Sirintharo was born on January 7, 1920.  His father, a train station manager, retired to a life of farming in the northeastern village of Nakhorn, Rachasima, Thailand.  It was here, along with his parents and six siblings that young Viriyang grew up.  It was also in this village that the young boy had his first profound meditation experience which started his journey towards enlightenment more than 80 years ago…

At 13 years of age, Luangphor had a good friend named Kim. One day Kim invited Luangphor to accompany her to the village temple for educational instruction.  (At that time there was no formal education system in Thailand and the only place to learn to read and write was at the local temple).  Luangphor did not want to go; he preferred to play outdoors with his friend Kim, and his father had already taught him how to read and write .  Nevertheless, Kim was determined, so the young boy reluctantly accompanied her to the temple.  In the temple Viriyang sat next to Kim.  The Abbot, the teacher, quickly advised him that a male could not sit next to a girl in the temple.  Luangphor was dismayed!  He did not want to go in the first place and now he had to sit away from Kim!  He reluctantly got up and sat in the back corner.  He was resigned to waiting while the four-hour class was conducted from 8:00 pm to midnight.  He soon became bored.  He closed his eyes and silently repeated in his mind – I not come again!  I not come again!  I not come again!  Then something amazing happened!  His spirit rose from his body and looking down he could see his arms, his legs; he could see his whole body.  He could see high in the sky!  He could see around the land!  He could see under the water!  At midnight, he opened his eyes just as the students were preparing to leave.  Viriyang stopped the Abbot and asked him to explain what had happened to him.  The Abbot was very surprised and stated, “Viriyang, how is it that you have had such a profound meditation experience?  You have had no teacher – some are not able to meditate this deep even after ten years of practice.”

This was Luangphor’s first encounter with meditation.  It happened at a time when his family was not affiliated with any religion and when Luangphor had no meditation instruction.  This is why Luangphor emphasizes that meditation is suitable for people of all faiths and backgrounds and can be conducted by everyone regardless of faith, race, age or gender.

It was also around this time that Luangphor went to the field and picked watermelons.  He then carried this very heavy load to market where he spent the day selling his goods.  At days end, he walked home, returning at dusk.  He was tired and wanted to rest.  Unfortunately, the water jugs at his home were empty so Viriyang was asked to fill them.  With two buckets in hand, he traversed back and forth and back and forth to the river until the jugs were filled.  With that task completed, he was extremely tired and wanted to rest.  However, he only had time to eat supper cause the rice containers were empty and needed to be refilled.  So, after eating, he went to husk the rice.  There was no automated rice husker; instead, Viriyang used a large wooden mortar and pestle to manually pound the rice paddy.  This primitive device was operated by forcefully and vigorously stamping on a wooden lever.  By foot, he stamped on the wooden lever – he pounded and pounded and pounded!  And then, everything went black and he dropped to the ground.  When he awoke about an hour later, he could not move.  He was totally paralyzed!  Luangphor’s parents summoned several doctors and experts over the following month to examine him but they all declared him incurable.  The young boy laid suffering in a cot on the veranda of his parent’s home.  Unbeknownst to his parents, Viriyang had made a silent vow.  He vowed that if he would be cured of his paralysis he would devote the rest of his life for the betterment of humankind.

Seven days later, an ascetic, a holy man dressed in white arrived at the boy’s home.  (Luangphor has since referred to this man as “White Robe”).  The White Robe ascetic told Viriyang’s father that he had come to cure his son.  His father informed the ascetic that he could try but his son was incurable.  The ascetic bent down and whispered in the boy’s ear and said “I have heard your secret vow.”  He then asked the young boy to repeat the vow aloud.  The young boy did.  Luangphor thought to himself that only he knew of his promise, and he began to think that, if this ascetic had the ability to know his secret vow, then maybe he would be able to help him.  The White Robe ascetic chewed on something and then from his mouth sprayed it over Luangphor’s body three times.  Amazingly, Viriyang was able to move and then run.  He was totally cured of his paralysis!

The next morning, the healer returned and asked the young boy to repeat his vow again, and then he instructed Viriyang to meet him at the local temple that afternoon.  Luangphor arrived at the time instructed and found the White Robe ascetic waiting under a tamarind tree.  The ascetic asked Viriyang to once again repeat his vow and then they went to a wooded area where they found a buffalo. Unexpectedly, the ascetic took a knife from his bag and swiftly severed the buffalo’s tail.  While reciting a prayer, he reattached the tail, without seeming to hurt the animal in any way.

Then, the White Robe ascetic commenced to teach Luangphor a prayer and made the young boy promise that he would repeat it daily for the next ten years.  Viriyang was advised that, if he missed a day, he would have to start all over again.  Luangphor agreed and kept his promise.  The ascetic then walked away and Luangphor never saw his healer again.

Shortly after this encounter, Luangphor was introduced to a teacher in his village with whom he began to study.  At the age of 15, Viriyang became an ordained novice and at the age of 20 an ordained monk.  He spent the next 20 years in the forests and jungles of Thailand studying and practicing meditation with famous and highly eminent Master Teachers – including Phra Ajan Kongma and the esteemed Luangphou Mun, Venerable Acariya Mun Bhuridatta Thera.

In the early 1960’s, after he had found extraordinary happiness and inner peace through meditation, he decided this knowledge would be wasted if he did not share it with others.  As a result, he decided to leave his woodland retreat and make a long arduous journey to Bangkok in 1963.  He took up residence on a swampy piece of land.  His only neighbors, at the time, were snakes.  This is where he initiated the construction of his temple, Wat Dhammamongkol.

Luangphor’s great skill and knowledge in meditation resulted in his gaining many supporters, and, with their aid, the temple was completed in 1985.  Since then, this project has expanded to include 25 acres of beautiful gardens, temples, classrooms and meditation facilities and resources.  Wat Dhammamongkol is now home to approximately 500 monks whom Luangphor oversees as the Lord Abbot – providing them with shelter, education and meditation instruction.  The main pagoda is the tallest in Thailand, and is where the monks attend school.  As well, on the grounds, Luangphor has built an elementary school, open to children that live in the area whose parents would not otherwise be able to afford to send them to school.  The facility also contains a vocational training centre where local adults can learn practical and employable skills to enter the workforce.  Another addition to the temple is the Meditation centre that is offered to those seeking to learn the theory and practice of meditation for free through his Meditation Instructor Course.  Luangphor has since expanded the Meditation Instructor Course throughout Thailand to a total of 79 centres where people of all denominations are welcome.  To date, over 22,000 Thai students have graduated from the Meditation Instructor Course.

Additionally, Luangphor’s philanthropic efforts include a hospital in the northern province of Chiang Mai that he donated as well as two universities that provide post-graduate studies in administration and social development.  (National Institute of Development and Administration (NIDA) is the University based in Bangkok).

Luangphor’s affiliation with Canada began when he had a vision to sculpt the image of the Buddha into the toughest natural material known – Jade.  In 1991, he had a vision of a huge boulder of jade submerged in the water.  On the same day, a 32-ton block of jade was discovered in a riverbed in British Columbia, Canada.  Luangphor raised money to purchase the incredible find and had it sculpted into a sitting Buddha and a statue of the Chinese Goddess of Mercy.  This initial contact with Canada has expanded to the development of Meditation centres across the country where the Meditation Instructor Course is offered free including Edmonton, Vancouver, Calgary, Niagara Falls, Toronto and Ottawa.  Most recently, he has expanded into the United States by opening the newest North American Willpower Institute in Dallas Texas.  To date, approximately 1000 students from Canada and the United States have graduated from the Meditation Instructor Course.

The establishment of the Meditation centres is in accordance with another of Luangphor’s most ambitious projects – to promote world peace through meditation.

Luangphor’s lifetime commitment to world peace has been unwavering since his miraculous healing.  He strongly believes that world peace can be attained if a sufficient number of people in the world consistently meditate.  Thus, he established the Willpower Institute Foundation in an effort to build meditation centres across the world where people can learn the theory and practice of meditation.

This condensed account of Luangphor Viriyang Sirintharo’s life history is evidence that he has kept the promise that he made to the White Robe ascetic at 13 years of age – to devote his life to the betterment of humankind.  A promise that he continues to pursue.